Yep, I’m so bad at selling guitars that I’m now selling another! 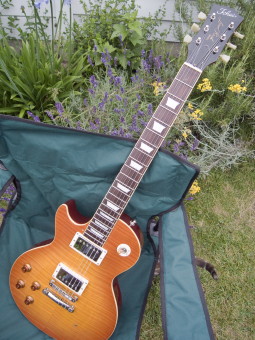 This is an early noughties Japanese Love Rock, model LS95F, and obviously it’s left-handed. The “F” indicates that there’s a thin flamed sycamore veneer on top of the usual maple cap. This is common on recent mid-range Love Rocks… it means that they can keep costs down by not having to use expensive flamed maple for cosmetic purposes. But then sycamore is a type of maple, so the tone isn’t going to be affected too much.

I’ve been very careful with this guitar (probably because it’s so damn cute and less obviously utilitarian than some of my other guitars) so it’s almost in “as new” condition. There’s just a couple of belt-buckle dents on the back. Everything is stock apart from the wiring… I installed CTS pots, Orange Drop capacitors and rewired everything to the Gibson 1950s schematic (Gibson and many of the replica manufacturers now use a slightly different wiring scheme, which seems to kill treble frequencies a bit more as you turn the volume down).

Click the photo to go to the Ebay auction page, for bigger photos and more info!

This entry was posted in Guitar, Music. Bookmark the permalink.