No, I don’t normally do hardware reviews here, especially not of computery-type stuff, but hey, here’s the exception…

I may have mentioned before that one of my favourite Apple products is the iPod Shuffle. I got a 1st generation Shuffle (A WHOPPING 512MB! ONLY £79!) back in 2005, primarily for gym listening… not a great environment for the old HDD-based ‘Classic’ iPods. The 1st gen Shuffle looks quite big and clunky now, but back then it was a wonderful blend of simplicity and beauty in miniature. An antidote to function creep, and I loved it.

When I wore out the battery I learned to replace it. When it finally died of sweat inhalation (the slight drawback wearing the 1st gen Shuffle on its halyard) I bought the 1GB version, and when I accidentally washed that with my gym kit, I bought the improbably tiny 2nd generation model. These days, I use the Shuffle for more than just gym listening… I tend to just drag a few podcasts or downloaded radio shows onto it whenever I’m going out. As a result, the battery is now nearing the end of its life, and having fortunately glossed over the design own-goal of the 3rd gen model, I now have a brand new 4th generation replacement! 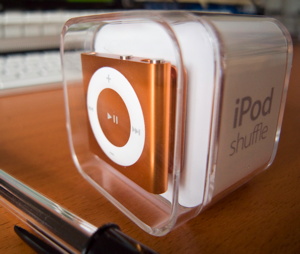 Yep, I could have learned to do another battery change, but when the new Shuffle is only £40, it hardly seems worth the effort (slight sense of landfill guilt notwithstanding).

As ever, it’s a beautifully designed thing in almost equally beautiful packaging. There’s no mini-dock with this version, so the tiny box only has to house the usual Apple earphones (destination: bin) and a rather stingy USB cable about 10cm long. Unless you have a high-power USB connection with easy reach, that’s going to be awkward. My iPods usually plug into a hub that’s glued onto the top of my Mac G5, under the desk, so I’m going to be looking for a cable extension pretty soon.

That’s a minor inconvenience. What really bothers about the new Shuffle is the operating system.

As with the previous generation, the new Shuffle can now store and play music from playlists… just like you have on larger iPods and iTunes itself. With no screen, you select playlists (and individual tracks) using the text-to-speech VoiceOver feature. If you choose to disable VoiceOver, the Shuffle simply defaults to “all songs” bypassing any playlists. Fine. As I’ve never needed playlists on my previous Shuffles, that’s how I’ll be using the new one, right?

Well, no. When they say “all songs”, what they actually mean is “all songs, except for podcasts”. As I mentioned above, my Shuffle usage mostly involves catching up with my backlog of BBC 6Music downloads and podcasts. I just switch on and listen until it’s time to load some more. On the 4th gen Shuffle, that means I have to enable VoiceOver in order to access the podcasts. Still not a major inconvenience, but there’s one more thing. Each podcast (however many instalments there are) lives in its own playlist, and has to be selected individually via VoiceOver.

For me, this is an inconvenience. I like to just hit “play” and then go through everything in date order. That means I get a bit of Stuart Maconie, a bit of Jarvis Cocker, some Laurie Taylor on Radio 4, the Guardian Science podcast, a Swedish language podcast… and then the same sort of thing from the following week. This is no longer possible without hitting the VoiceOver button several times. Just leaving the Shuffle to play (whether in “shuffle” or “play in order” mode) means that you’ll hear either all your standard songs or every instalment of just one podcast. That’s great for people who need that facility, but why not provide a way to switch it off? Bypass all the clever gubbins and just make the device play through each file in turn?

I’ve tried a couple of hacks, such as putting both standard mp3s and podcasts into a single playlist in iTunes and then accessing that playlist via VoiceOver on the iPod, but without success. I’ll just have to modify my listening habits slightly.

This is why I mentioned the pleasing lack of “function creep” on the original Shuffle. They’ve now added one of the more advanced features from the full-size iPods, simply because they can, and they’ve made a balls-up of implementing it in a less appropriate context. I still love the Shuffle concept, and I’m still in awe of Apple’s design skills, but… well, I’d actually like a bit less for my forty quid, y’know?