They’re not even elected yet…

Ah, the excitement of the Royal Mail “fee to pay” card… although tinged with annoyance, it’s still exciting, because the £1.30 surcharge makes it seem so IMPORTANT, SERIOUS and UNMISSABLE. We received two identical cards yesterday, informing us of the need to pay two identical surcharges. There are two of us here, so it seemed likely that we’d both won the same amount on the pools… who could have predicted that?

So off I gambolled to the local sorting office, eyes bright with expectation, paid my £2.60 and ripped open my envelope to reveal the exciting (and ideally monetary) delights inside.

Imagine my surprise when I found myself holding a copy of the Sutton & Cheam Conservative Party newsletter from December 2009. No, wait… two copies!

Nearly three quid! For THAT?! 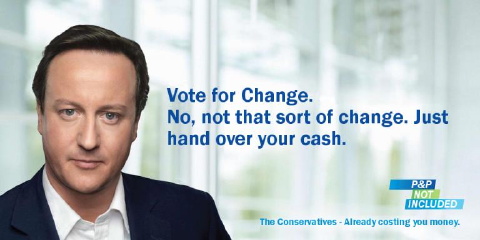 Well, I say “surprise”, but actually I was consumed with a sudden (and possibly disproportionate) rage over such a poor reason for spending almost the price of a Caffe Nero Hot Chocolate Milano. I don’t even live in that constituency any more! And even if I did, I wouldn’t be voting for that nasty little gang of Bullingdonites, especially when the current incumbent is Paul Burstow, a man whose sincerity, effort and integrity are beyond the wildest offshore tax haven dreams of any Tory you’d care to mention.

I’ll be writing to Mr Dave From PR, using the return-paid envelope provided, and suggesting that his young pal Osborne should reimburse me from the tuck shop takings.

This entry was posted in Politics. Bookmark the permalink.